A dynamic event featuring top CEOs as they address the lack of skilled STEM candidates available in the workforce, which has put an increased focus on diversifying the talent pool. Learn firsthand how organizations are successfully closing the diversity gap and making the move from checking boxes to intentional action while finding and growing new talent for the future.

The event has ended, but we invite you to watch the recording.

CEO STEM Allies: Progressing the conversation to build a diverse culture in the workplace

The lack of skilled STEM candidates available in the workforce has increased focus around improving the diversity of the current STEM talent pool. However, building a diverse workplace is challenging. It requires hiring teams to broaden talent pools and rethink tactics. It means being challenged by different perspectives and approaches to problem-solving.

Together, we will explore how organizations are successfully closing the diversity gap, making the move from checking boxes to intentional action while finding and growing new talent for the future. By reframing how companies think and act, coupled with using the right strategies and tactics, we can all become part of the solution. Join us as we discuss how you can:


No matter where your company ranks on the diversity spectrum, join us in changing the conversation in your own company. 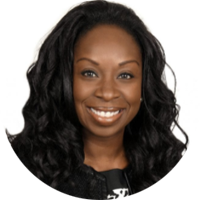 Nicole Armstrong is a business executive with over 20 years of experience spanning the public, private and non-profit sectors, ranging from large to mid-sized organizations, with a robust portfolio of leading operations and emerging business strategies in technology, education and consulting.

Prior to becoming the first female and African-American chief executive officer for TechBridge in 2020, she held various executive leadership roles as a senior vice president of customer success at Renaissance Learning, CEO and co-founder of Noodle Markets and president of CORE Education and Consulting Solutions (ECS), Inc.

Nicole has a bachelor's degree with honors in computer science engineering from Binghamton University’s Watson School of Engineering and graduated Phi Beta Kappa from the University of Maryland University College with a master’s degree in business. 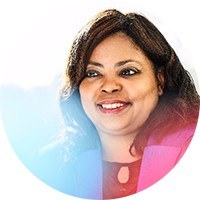 She brings more than 20 years of experience in human resources, diversity and compliance, along with a passion for advocating on behalf of underserved populations. She is the executive sponsor for Randstad’s Hire Hope program and was recognized as the Most Powerful Influential Woman by the National Diversity Council in 2018. 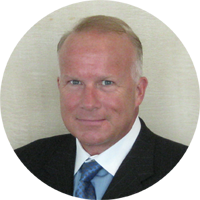 As the technology strategy and advisory leader, he advises clients on transforming their business while integrating and maintaining with traditional IT. His team is the market’s leading advisor in shaping the technology vision and transformation journey. He advises his clients on cloud, applied intelligence and the next wave of technology integration through connecting devices transforming the industries. By working end-to-end across all IT dimensions, from strategy to architecture to digital, Keith’s team delivers transformative outcomes.

As the practice leader, Keith has accountability for successful delivery of all technology strategy/advisory engagements.

Keith joined Accenture in 1987 and during his career, he has been accountable for large scale transformations and running complex programs for many global clients. 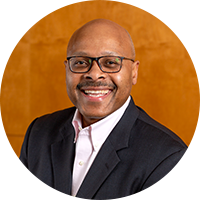 Maurice Jones is the CEO of OneTen, a coalition of companies dedicated to creating one million jobs for African Americans by the end of the 2020s. Previously, he was president and CEO of the Local Initiatives Support Corporation, a national community development financial institution.

Prior to joining the Local Initiatives Support Corporation, he was the secretary of commerce for the Commonwealth of Virginia, where he managed 13 state agencies focused on the economic needs in his native state.

Maurice Jones was appointed secretary of commerce and trade by Governor Terry McAuliffe in January 2014. Previously, Jones served as deputy secretary for the U.S. Department of Housing and Urban Development from April 2012 through January 2014. As the second most senior official at HUD, Jones managed the department's day-to-day operations, the annual operating budget and the agency's 8,900 employees.

Prior to HUD, Jones was president of Pilot Media, the largest print and digital organization in Hampton Roads, Virginia. Jones joined Landmark Media Enterprises, owner of Pilot Media, in 2005, serving as vice president of the Landmark Publishing Group, consisting of multiple newspapers, including the News & Record in Greensboro, NC; The Roanoke Times; The Capital Gazette in Annapolis, MD; and Landmark Community Newspapers, Inc., based in Shelbyville, KY. In 2006, Jones became the vice president and general manager of Pilot Media, and in 2008, he became president and publisher of The Virginian-Pilot, the locally owned and managed newspaper founded in 1865.

A native of Kenbridge, VA, Jones also served as commissioner of the Virginia Department of Social Services and deputy chief of staff to then-Virginia Governor Mark Warner. At the U.S. Treasury Department, Jones was special assistant to the general counsel and he also served as legal counsel to the Community Development Financial Institutions (CDFI) Fund and as director of the fund during the Clinton administration. Jones also worked for the law firm of Hunton & Williams in Richmond, VA, and he was a partner at Venture Philanthropy Partners, a firm that invests millions in the Washington, DC metropolitan area to assist low-income children.

Jones received a bachelor of arts in political science from Hampden-Sydney College and attended Oxford University in England on a Rhodes scholarship, where he received a master of philosophy in international relations. He later received a juris doctor from the University of Virginia. 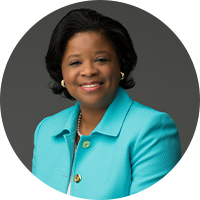 Shan Cooper is the executive director for the Atlanta Committee for Progress. The ACP was founded in 2003 with the mission to provide leadership on key issues important to economic growth and inclusion for all citizens in the City of Atlanta. The committee includes more than 40 highly engaged chief executive officers, university presidents and civic leaders who offer expertise in service to Atlanta and its future development.

Shan is the former chief transformation officer of WestRock and was responsible for the recycling and waste services division, procurement, enterprise logistics and information technology. Prior to joining WestRock, Shan served as vice president and general manager of Lockheed Martin Aeronautics Company.

As general manager, she was responsible for the 6,000-employee operations across Marietta, GA; Meridian, MS and Clarksburg, WV that designs, produces, modifies and maintains military aircraft for the U.S. and countries around the world. Marietta programs included the C-130J Super Hercules, F-22 Raptor, P-3 Orion, C-5M Super Galaxy and F-35 Lightning II.

Shan earned a bachelor’s degree in biology and religion from Emory University and a master of business administration from the Roberto Goizueta Business School of Emory University. She is also a graduate of the Rutgers University Executive Masters in Global Human Resource Leadership Program. 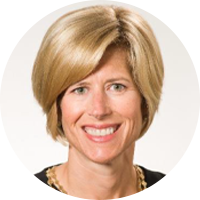 Katie Kirkpatrick currently serves as the president and CEO of the 160-year-old Metro Atlanta Chamber (MAC). Kirkpatrick is known for her public policy prowess, courageous leadership and more than a decade of driving impact through her work at MAC.

Previously as MAC’s chief policy officer, Kirkpatrick served as the link between the metro Atlanta business community and local and federal government. She galvanized the public policy team’s priorities in business climate, educated workforce, transportation and sustainability — including water, energy and the environment. The public policy team continues to fight to protect Georgia’s top-rated business climate against legislation discriminatory in nature or harmful to the region’s ability to create, recruit and retain jobs.

Kirkpatrick currently serves on the GRACE Commission, composed of public officials, law enforcement, businesses and nonprofit organizations, committed to ending human trafficking in the state of Georgia and the City of Atlanta. She is a vice-chair for the Metropolitan North Georgia Water Planning District and a past board chair for the Institute for Georgia Environmental Leadership. She is also a member of the board of directors for the Atlanta Track Club.

Kirkpatrick is a current member of Rotary Club of Atlanta, the International Women’s Forum and the Georgia Freight and Logistics Commission. She is a member of the board for Central Atlanta Progress and executive committee member of Learn4Life — an initiative working to advance educational outcomes for students in metro Atlanta. In 2021, Kirkpatrick was named one of Georgia Trend magazine’s 100 Most Influential Georgians, and in 2020 she was named one of Atlanta magazine’s Atlanta 500, which ranks top leaders in the region.

A graduate of Auburn University, Kirkpatrick is a registered professional engineer in several states and a member of the school’s 100+ Women Strong group of successful female engineering alumnae. Kirkpatrick is an alumna of Leadership Atlanta, a program designed to propel established leaders to further serve their communities. She is a volunteer with youth sports leagues in metro Atlanta and the Peachtree Road United Methodist Church.

Kirkpatrick lives in Atlanta with her husband, Dow, and their two sons, who currently attend the Lovett School, where she regularly serves on the parent volunteer association. 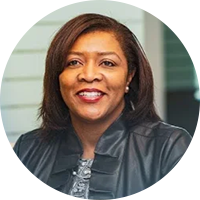 Angela Harris is the senior vice president of human resources for Randstad US, with responsibility for talent management and development to advance organizational effectiveness for the Randstad Technologies Group. Prior to being appointed to this role in 2014, Angela served as vice president of human resources for Randstad US. Angela brings nearly two decades of experience and expertise holding leadership roles and advancing HR service delivery and excellence within some of the largest staffing companies in the industry. During her career, Angela has served as director of HR for Spherion, senior director of HR for Todays Staffing and vice president of Aurum Technology's HR Group for the six years prior.

In addition to her HR and staffing experience, Angela also served nearly 10 years in customer service and relations in the banking and automotive industries. Her background includes establishing and centralizing customer call centers for banking operations, as well as holding leadership roles in electronic data systems (EDS).

Angela has a bachelor's degree in broadcast journalism and a master's degree in communications from Southern University in Baton Rouge, Louisiana. She lives in Dallas and is active in her community, where she is a member of Big Brothers/Big Sisters mentoring program. 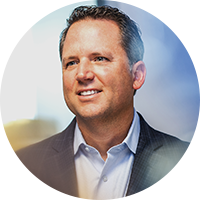 Graig is responsible for day-to-day operational leadership and strategic direction for Randstad’s professional staffing and solutions, including the technologies, engineering and life sciences lines of business as well as the company’s technology consulting brand, Celerity. Supporting Randstad globally, Graig manages the Randstad offshore services teams to bring efficiencies and delivery back to the U.S. market. Starting his career with the U.S. Marine Corps after college, Graig has since spent the last two decades in professional staffing, IT managed services and management consulting. 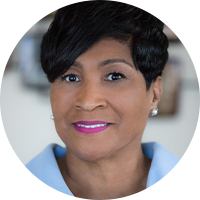 As president of AT&T’s Georgia operations, Venessa Harrison is responsible for developing the overall strategic direction of AT&T’s public policy, economic development and community engagement activities across the state of Georgia.

Named to her current position in November 2018, Harrison works closely with state and local policymakers and business and community leaders to foster an environment that welcomes investment and innovation, focuses on bringing new technologies that drive innovation and create jobs and provides educational and economic opportunities to empower the improvement of quality of life for all Georgians.

Harrison began her telecommunications career as a telephone operator. She subsequently pursued a career-development opportunity in the network organization, quickly rising through the ranks of management within AT&T with increasing responsibility in the network, business and regulatory and external affairs departments. Prior to her current position, Harrison served for six years as president of AT&T North Carolina.

Harrison holds a business administration degree from the University of Phoenix. A North Carolina native, she is a proud wife, mother and grandmother.

Thanks for your interest. We know skilled STEM talent is hard to find, and finding diverse STEM talent even harder. So we created programs and partnerships to set your company up for success. See all the programs available to help grow your STEM talent pipeline.