finding the right approach to political expression at work.

According to an old rule of thumb, three topics should never be brought up in workplace conversations: sex, religion and politics. For the first two, certainly, the rule remains safely true today. But with this year's election cycle drawing near, it's worth revisiting the latter. How is the feverish pitch and frequently polarizing rhetoric of America's political parties, together with the emergence of new avenues like social media for political expression, playing out in workforces nationwide?

To answer that and other questions, Randstad commissioned a study of more than 800 U.S. employees — and the results might surprise you.

Contrary to the old rule of thumb, our study found that political conversations between coworkers are in fact commonplace today, and so taking a strategic approach to political engagement can actually give companies significant competitive advantage as they seek to hire and retain talent. Read on to find out how.

politics will invariably surface in the workplace

According to Randstad's study, fewer than half (47%) of companies have explicit policies in place governing the political speech of employees in the workplace. And that's a critical oversight — for at least two reasons.

One is that there's a clear business case to be made for employers to take control of political conversation in the workplace. More on that in a moment.

The other is that political considerations are already a factor in the way that your employees interact — both formally, when they are at the office, and informally, across digital channels, social media and outside the office. And if you can’t effectively limit your employees' political expression, you might as well work to structure the forms that it takes, instead of naively pretending that it doesn't exist.

How do we know that conversations about politics are already an integral part the way employees are interacting? Our study uncovered several telling data points.

For starters, just over half of employees (55%) said they've witnessed heated political discussions or arguments between colleagues in the workplace, and more than a third said that they've been involved in them.

Another 44 percent of respondents said that their coworkers regularly discuss politics through digital channels.

how common are political conversations at work? 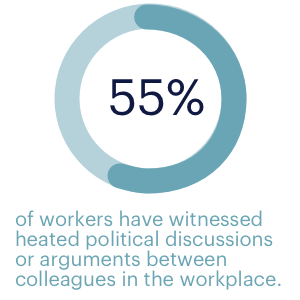 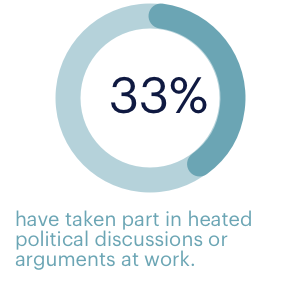 Of these channels, notably, social media appears to be the site of significant — and sometimes covert — political exchange. When it comes to political expression, forms of monitoring and self-monitoring are pervasive strategies used by employees. For instance, 60 percent of employees said that they are careful about what they post on social media related to politics, for the express reason that they worry what their colleagues might think. 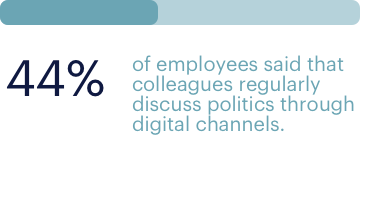 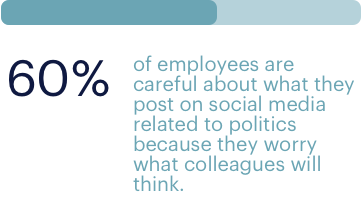 In some instances, these interactions culminate in passive forms of retaliation, especially among younger employees. For instance, while slightly fewer than half (46%) of all employees reported unfollowing colleagues on social media because of their political posts, that percentage rose to 62 percent among millennials.

the business case for regulating politics in the workplace

The fact that people get fired up when talking politics is so obvious to most of us that it probably goes without saying.

Unfortunately, what also goes without saying is how heated political exchanges sometimes make non-participants feel when they simply overhear them. As a case in point, 72 percent of employees said that they feel stressed or anxious when heated political discussions or arguments occur in the workplace.

Not surprisingly, all of that psychological and emotional freight is a burden for businesses, too. Indeed, 44 percent of respondents said that heated political discussions or arguments impact their productivity. 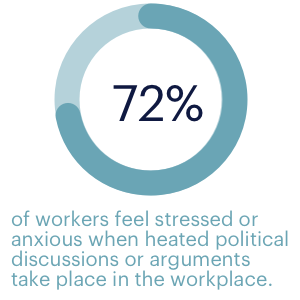 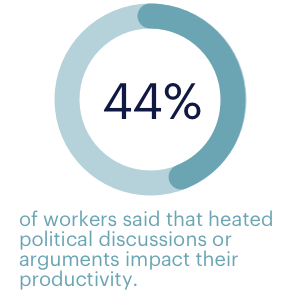 Given all of these negative consequences associated with political expression in the workplace, what can leaders do to steady their teams — and position their organizations for success — during a potentially contentious election season?

Diversity and inclusion are more than just buzzwords at successful organizations today. After all, research shows that gender and ethnic diversity are clearly correlated with profitability. It stands to reason that when diverse perspectives are brought together, innovation thrives. Leaders would be wise to think of political conversations between colleagues within that framework.

Just as different generations have different expectations and preferences at work, colleagues with different political opinions will impact your workplace culture. That’s not a bad thing, but it affects how managers should intervene to resolve issues. Remember: political conversations are inevitably going to happen at work, whether you want them to or not. As a leader, then, it's a good idea to open up dialogue in a forum where you at least have some control.

One place to start is with a companywide forum. If, for instance, your organization is already participating in training sessions on topics like unconscious bias and diversity and inclusion, you've already laid a lot of the groundwork for a productive meeting: Respecting, listening to and allowing room for the viewpoints of other people are all common themes. So you might consider hosting a conversation about political differences — or, more specifically, a conversation about how to have political discussions. You'll need to establish some rules beforehand, of course, and consider hiring an experienced facilitator who can help ensure that things run smoothly.

As things stand, not all employees are squeamish when it comes to on-the-job political exchanges: 65 percent said they feel comfortable discussing politics with their colleagues, according to our study. Beyond that, almost half (49%) of workers reportedly enjoy hashing out political differences with colleagues at work, as it helps them understand different perspectives. And, in what is perhaps the most encouraging sign of all, more than a third (37%) of employees said they have changed their opinions on political issues because of discussions they have had with colleagues.

most workers are open to political conversations at work. 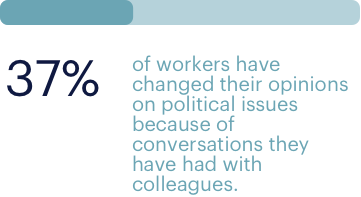 In other words, there are significant potential benefits — greater team cohesiveness, more openness and dialogue, to name a few — to be gained from encouraging employees to engage in political conversations. Just make sure you do it in a structured, managed environment, with broad-base senior-level support.

As the latest study by Randstad US makes plain, it’s simply unrealistic to think that a clean partition between political conversation and neutral workplace banter is possible. The reality is, heated political conversations are already taking place at your organization, with a host of potentially negative and far-reaching consequences. Whether forward-thinking leaders decide to treat this reality as a challenge or an opportunity, they need to start proactively addressing the issue today. 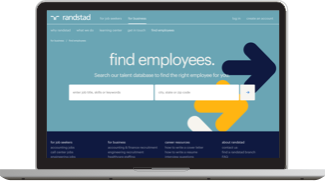